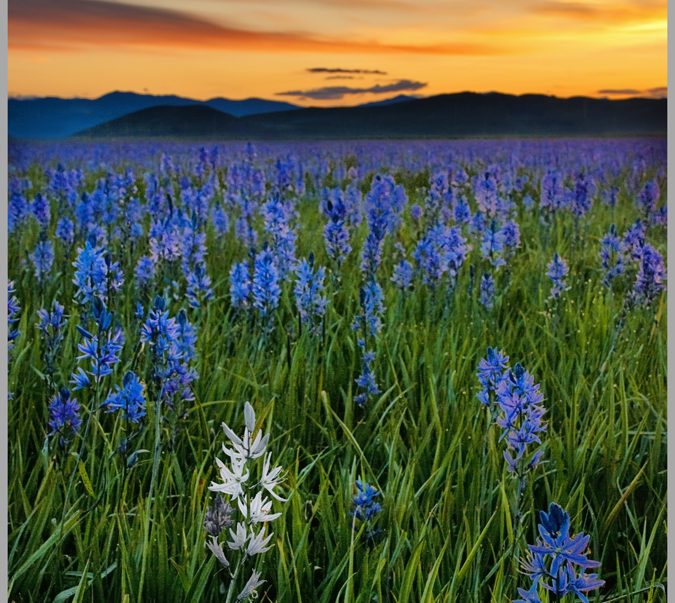 Image: Sunrise on the Camas Prairie by Charles Knowles, courtesy of Flickr

A lot of environmental work is defending the last remaining wild places and the remnants of healthy native ecosystems from commercial exploitation. This approach is essential, but it is a fighting retreat, an implicit concession that wild nature will continue to dwindle away with each passing generation.

Let’s imagine a future in which the natural world recovers, instead of merely battling over the pace of the losses. Let’s increase the geographic expanse of lands dedicated to natural processes and wild species’ habitats. And for those lands dedicated to crop production or human residences or commercial enterprises, let’s find ways to let nature in rather than struggling to keep nature out.

The United States still contains an abundance of western public lands, where plant communities and wildlife populations still provide the building blocks of healthy native ecosystems. But since colonization, these same lands have been seen as a bank account of “natural resources,” and for centuries various industries have been overdrawing this account as if it were their own private domain.

The “30 by 30” initiative to protect 30% of U.S. lands by 2030 was originally envisioned as a stepping stone to dedicating half the Earth to nature by the year 2050. The late Dr. E.O. Wilson, one of history’s most eminent ecologists, saw this 50 percent threshold as providing the minimum requirements to sustain at least 85% of the planet’s native species. In 2020, legislation was introduced in Congress to make that happen, and now the presidential administration has rolled out its own ‘America the Beautiful’ campaign to advance the 30 by 30 goal. Will this become the backbone of a bold new era in conservation achievements, or just a hollow talking point, a footnote to history in political science textbooks?

The answer to this question probably boils down to the choices that we, the people, make. We have the power to demand that our elected leaders and career public servants restore healthy native ecosystems, and all their component parts – the wolves, the sage grouse, the prairie dogs, the bison, the pygmy rabbits, the slickspot peppergrass, the Kings River pyrg – to their original robust abundance.

Across the West, federal lands are beset by myriad ecological insults – oilfields, strip mines, powerlines, dams – each authorized and approved to provide profits for some business operation. But if we could wave a magic wand and make just one industry disappear from the western landscape, to give native wildlife the best chance to rebound, and give native ecosystems the chance to recover and flourish, the industry whose absence would do the greatest good for the natural world and its wild inhabitants is obvious: The livestock industry is clearly nature’s biggest, most widespread, and most troublesome antagonist. It’s long past time for our society to take this environmental threat seriously. Some 250 million acres of western public lands are currently rented to livestock producers for cattle and sheep grazing, and many perennially fail to meet land health standards. It’s time to change that paradigm. With significant reforms some of these lands could contribute to the 30 by 30 objective.

So, this Earth Day, let’s all embark together on a quest to re-wild this green and blue ball, isolated in the inky blackness of the cosmos. Let’s do this not only to make a livable future for our grandchildren and their grandchildren, but for all of the life forms – each beautiful and intriguing and resilient in its own way – with which we share this spinning lifeboat.