Southern Arizona is no place for cows. The saguaro forests, dry washes, sporadic rainfall, and high temperatures make the environment inhospitable for livestock, but that hasn’t stopped any livestock operators from trying. 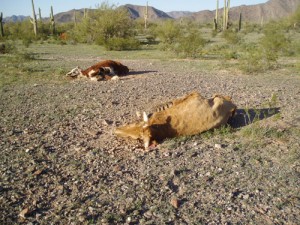 Western Watersheds expanded into Arizona in the spring of 2007, in order to ensure that unsustainable grazing in the hot deserts, and on the desert National Monuments, ceases to threaten species, ruin soils, and denude the landscape.

In 2019, we expanded our presence in the southwest with the addition of the Arizona and New Mexico Director and we have been working to protect even more of Arizona’s ecologically important lands by watchdogging the Arizona Game and Fish Department, the Forest Service, and Bureau of Land Management and pushing back on bad land manager decisions. Our work includes the Sonoran Desert, Agua Fria, and Ironwood Forest National Monuments, the San Pedro and Gila Box Riparian National Conservation Areas, the Apache-Sitgreaves, Coronado, and Tonto National Forests, and lands managed by the Bureau of Land Management from the Arizona Strip to the U.S.-Mexico border.

Arizona is not dissimilar from other western states that have been propping up a dying industry with funding. We are looking at ways to protest this mis-use of taxpayer money, especially in specific areas where drought-related “hardship” payments are being used as an incentive for keeping cattle on publicly managed lands.

Instead of paying ranchers to find ways to put cows back on dry public lands, we’re teaming up with the National Public Lands Grazing Campaign to pursue voluntary relinquishment opportunities, areas so marginal for grazing that many operations consist of paper cows only. We believe the voluntary permit buy-out could be a win-win solution, especially on national monuments.

Because the lands of Arizona are just too fragile to sustain grazing, and because many of the imperiled species in the Sonoran Desert are directly and indirectly harmed by livestock grazing, we have high hopes that a little bit of pressure will bring a lot of change.

Feel free to get in touch with us if you have any questions.