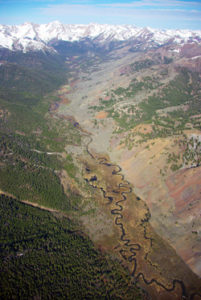 A watershed is land that contributes water to a stream,

other body of water. The boundary that separates one watershed from another, causing falling rain or melting snow or spring water to flow downhill in one direction or the other, is known as a “watershed divide”.

John Wesley Powell put it well when he said that a watershed is:

“that area of land, a bounded hydrologic system, within which all living things are inextricably linked by their common water course”

The defining watershed divide in the United States is the Continental Divide which generally follows the Rocky Mountains and determines whether water flows to the Pacific or Atlantic Ocean. Our biggest watershed is that of the Mississippi River which starts in Minnesota and spreads across 40% of the lower 48 states, drawing its water from the Yellowstone, Missouri, Platte, Arkansas, Canadian, Red, Wisconsin, Illinois, Ohio and Tennessee Rivers—and their drainages.

While major watersheds are clearly visible on satellite photographs and maps, within each one is an intricate web of secondary drainages, each fed by a myriad of streams and smaller creeks, many unnamed and so small a person can jump across them.

In many parts of the country, particularly in the arid West, these smaller drainages may cover thousands of acres, yet collect far less water than those in the East. For example, the Hudson River has a flow equivalent to that of the Colorado, yet collects its water from a land area less than 1/20th the size required by the Colorado River which is 1,400 miles long.

Because there is very little land that is truly flat, watersheds and drainages are all around us, and just about everybody in the United States is within walking distance of one whether they live in a city, on a farm, in a desert, or on an island. Some carry the names of well known rivers like the Columbia and the Rio Grande. Most, however, do not, and remain anonymous, hidden in culverts or ditches or flowing only intermittently in high deserts, unrecognized and unheralded as vital, contributing parts of the complex system that supplies all of our fresh surface water. 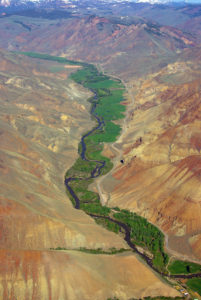 “Surface water” runs through watersheds and drainages, from mountains or high ground to the sea. Underlying watersheds, or adjacent to most of them, however, is an even greater source of supply, “ground water”. Ground water is formed when falling rain or melting snow percolates deep into the ground over time, sometimes centuries, to a level where it is stored in porous rock and sand and accumulates there until tapped by drilled wells or comes to the surface of its own accord as a spring or artesian well.

This stored ground water is commonly referred to as an “aquifer” and its level is measured in terms of a “water table”. Like watersheds, water stored in aquifers generally seeps downhill, and many, like the Mississippi River drainage, cover wide areas of the United States. The nation’s largest deposit of ground water is the Ogallala Aquifer System that underlies 8 states, Wyoming, Colorado, South Dakota, Nebraska, Kansas, Oklahoma, Texas and New Mexico. Many smaller aquifers are found across the country and some remain unnamed and uncharted.

These two water resources, surface and ground water, not only sustain all life but are the only practical source of fresh water we have for industry, agriculture, and municipal use. And although they are often viewed as two separate entities, they are, for the most part, inextricably linked. For example, in addition to rain and melting snow, ground water springs are vital to maintaining the flow of many streams and rivers in a watershed. And a great deal of surface water, about 25% of it, percolates deep into the ground where it is stored in or helps recharge our aquifers.

The remaining surface water, after evaporation, which claims some 40%, becomes the complex system of streams and rivers that flow through watersheds from the mountains or high ground to the sea. Along the way, however, some of that water is temporarily held back in ponds, wetlands and the land bordering creeks, streams and rivers where water may not be visible but lies just below the surface. These areas are collectively referred to as riparian zones, and while they constitute only a small percentage of the land in most watersheds, they are the heart and soul of a delicately balanced natural system that, collectively, produces our fresh water.

A healthy, functioning riparian zone is a virtual classroom in life sciences—botany, biology, animal ecology, fisheries, entomology and ornithology—and contains a miraculous diversity of wildlife, fish, birds, bugs and an array of vegetation ranging from trees and grasses to algae and other aquatic plants.

Riparian zones and the biodiversity they contain are interdependent. That is, the trees, plants, grasses, reeds, and algae provide food, shade, protection and habitat for wildlife, birds and fish. Their root systems stabilize soil and prevent erosion and flooding in wet seasons; and in dry seasons, this vegetation retains water and releases it slowly to maintain even stream flows. For their part, the variety of animals, fish, birds, and bugs living in these zones aerate the soil, spread pollen and seeds and eventually, when they die and fungi and bacteria break down the dead organic matter, provide nourishment for a new generation of riparian vegetation.

This is an oversimplified description of a pristine riparian zone within a source watershed, that critical part of the system where water is gathered from a web of springs, bogs and creeks and begins its long, twisting journey from the mountains to the sea. Such pristine conditions still exist in some isolated areas, but today no major river arrives at its terminus in this condition, and some don’t make it at all.

Along the way, watersheds are radically transformed by man. Rivers are dammed, channeled, and otherwise diverted to serve a multitude of agricultural, industrial and municipal purposes. And while a good portion of the water is eventually released back into the system, much of it is polluted and requires costly purification.

Today, water conservation is one of the most serious natural resource issues facing this country, and nowhere is conservation more important than in the arid West which is literally running out of water.